The Use of Prescription Drugs in Esports and Gaming

A recent Washington Post article1 reflected on the widespread use of amphetamine-based prescription drugs, such as Adderall, among players in esports tournaments. This blog explores whether these stimulants can be classed as ‘performance enhancing’ and looks at how the esports industry is tackling it.

Use of prescription drugs in esports

It is an open secret within the esports community that many esports players and video gamers use medication, like Adderall, which is often prescribed to treat people with attention deficit hyperactivity disorder (ADHD). Adderall has long been associated with students pulling ‘all nighters’ to cram for exams or finish assignments and gain an academic edge. In the gaming world, it is used to improve players’ focus, attention and reflexes during game play, and keep them awake for hours on end. 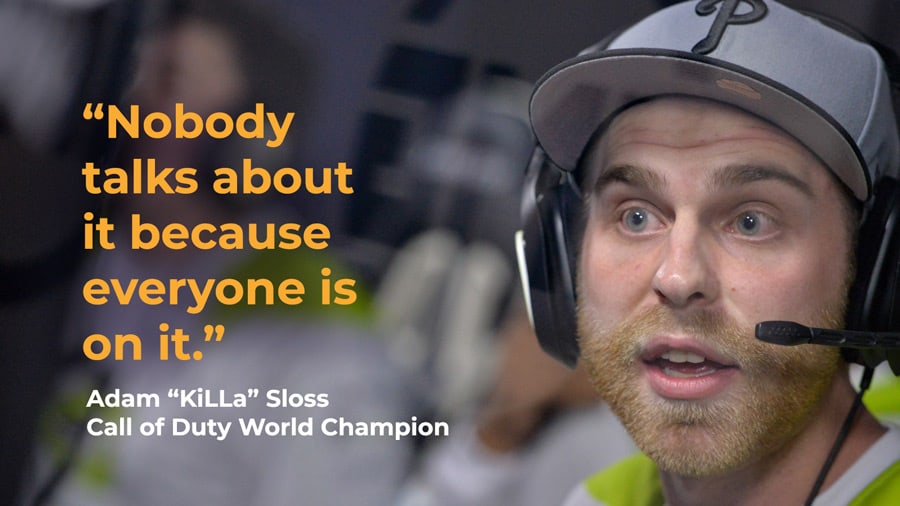 When asked if he had witnessed the use of Adderall among esports players, former Call of Duty World Champion Adam “KiLLa” Sloss replied: “Nobody talks about it because everyone is on it.” Sloss stepped down from professional play in 2019 and cited rampant drug abuse as a major factor. He said: “The Adderall abuse was too much to keep up with.”

As the appeal of esports continues to rise – with huge prize funds and lucrative sponsorship deals at stake – the competition to become professional is fierce, with hundreds of millions of gamers competing for hundreds of spots. Research points to widespread misuse of prescription medication for ADHD among adolescents, college students and players – including peers sharing, trading or selling their prescription stimulants to peers.

Some in the esports industry cite research indicating that psycho-stimulants, such as Adderall, do not improve gaming performance, and therefore should not be regulated. Research on non-ADHD youth and players points to a placebo effect with stimulant use2, meaning the person perceives an enhancement only when they have an expectation that they will perform better.

Nevertheless, a widespread perception among esports players remains that these drugs give them an edge in highly-competitive and lucrative esports tournaments. This perception may be fueled by media reports, which tend to report on players using these drugs to improve focus and concentration, while failing to mention all the risks involved. Research found that university students, parents and healthcare providers perceived the media as an important source of information about neuroenhancement3. Their interviewees were concerned that unbalanced reporting could normalize behaviour.

The World Anti-Doping Agency (WADA) and the US Anti-Doping Agency (USADA) consider Adderall to be a performance enhancer. The National Basketball Association (NBA), National Football League (NFL) and Major League Baseball (MLB) have included it on their list of banned substances.

In 2015, the Electronic Sports League (ESL) – one of the oldest and largest esports leagues – announced it was introducing anti-doping measures4. It partnered with the Nationale Anti Doping Agentur (NADA), to create an anti performance-enhancing drugs policy. It also teamed up with the World Anti Doping Agency to help enforce and disseminate guidelines and rules surrounding the use of performance-enhancing drugs at ESL events worldwide.

However, even though some esports industry leaders claim that the illicit or unprescribed use of amphetamines has been eliminated, players can easily circumvent anti-doping restrictions by obtaining an ADHD diagnosis. When the MLB introduced a ban on stimulant use without a therapeutic exemption, the incidence of players with an ADHD diagnosis jumped from 28 to 103 players5 in a single year.

Another barrier to removing drugs use in esports is location. Often, esports tournaments are not held in one physical location which makes it extremely difficult – if not impossible – to administer drug testing. In 2019, Epic Games hosted the annual Fortnite Winter Royale. Participants in the tournament’s qualifying rounds all played online from remote locations. There was no feasible way for Epic Games, or any other governing body, to check whether players were using performance-enhancing drugs.

Maria St. Pierre, Clinical Project Manager at the Neurological Clinical Research Institute at Massachusetts General Hospital, compared Adderall to performance-enhancing drugs in traditional sports and believes its use is now rampant among professional gamers. In the Washington Post article about the widespread use of Adderall among esports players she explained: “In the gaming world, they like to use it as an enhancer to gain an advantage over their opponents. Those taking Adderall have an unfair advantage over someone who is not taking Adderall or any other stimulants. And let’s keep in mind that taking any medication that is not prescribed to you can have long-lasting, detrimental effects. Physically, Adderall is like taking speed or meth. Psychologically, not only is it a highly-addictive drug but it can also cause psychosis and paranoia.”

As esports competitions and viewership grow at unprecedented rates, and with it the use of stimulants, we must engage responsibly with the implications for esports players. The motivations and perceptions of players who use prescription stimulants – as well as the long-term cognitive, psychological and physical impacts of stimulant use on many up and coming competitive gamers – must be understood to be effectively addressed.

With the exponential growth in esports and problematic gaming on the rise, helping professionals need to be equipped to understand this booming industry, and have robust tools and insights to work with esports gamers and their families.

To find out more, register your interest for our upcoming Esports Mental Wellness Training which is launching this summer.