China is one of the most lucrative gaming markets in the world. Over the last decade, the country’s gaming revenue increased more than six-fold and it is predicted to continue growing (albeit at a slower rate) over the next few years.

This blog reveals the latest video game statistics, demographics and trends, and looks at how popular is gaming in China.

China is a key player in the global games market. This is demonstrated by these insights into market growth and video game industry revenue in China:

China is sometimes referred to as the gaming capital of the world as it makes up around 25% of the global video game industry. It is interesting to look at who plays video games (demographics) in China to understand what is driving market growth.

A China Gamers Report by Niko – a specialist consultancy covering video games, esports and streaming in Asia – found that:

Chinese cities are categorized into five tiers. Tiers one and two are large cities and tiers three to five are smaller cities. Gamer behaviors and spending habits vary widely between the different tiers:

Here are some of the current trends influencing the Chinese gaming market:

In August 2021, the Chinese government imposed the world’s strictest limits on gaming1 in a bid to curb video game addiction, which officials say is damaging children’s physical and mental health. In fact, a state media article went as far as describing online games as “spiritual opium”2. Under the gaming curfew, minors are banned from playing online between 10pm and 8am and restricted to 90 minutes’ gaming time on weekdays and three hours on weekends and holidays.

The guidelines also include spending limits for minors of up to 200 yuan ($US29) per month for children aged eight to 16 and up to 400 yuan for young people aged 16 to 18. According to the Chinese Business Review3, it is difficult to predict the impact these restrictions will have on the future of the Chinese games industry, especially as no enforcement measures have been announced. There are early indications that using virtual private networks (VPNs) or registering with an adult’s contact information can help circumnavigate the restrictions.

Gaming in China is highly regulated and international companies have to follow strict procedures to receive a gaming license – assuming the government has not put a freeze on new video game licenses4 which it did for nine months in 2018 and again in 2021. To further complicate the process for overseas businesses, all video games must be 100% Chinese-owned5, which means forming domestic partnerships.

The Chinese government has taken a number of steps in recent months to control the gaming industry:

Rising popularity of esports in China 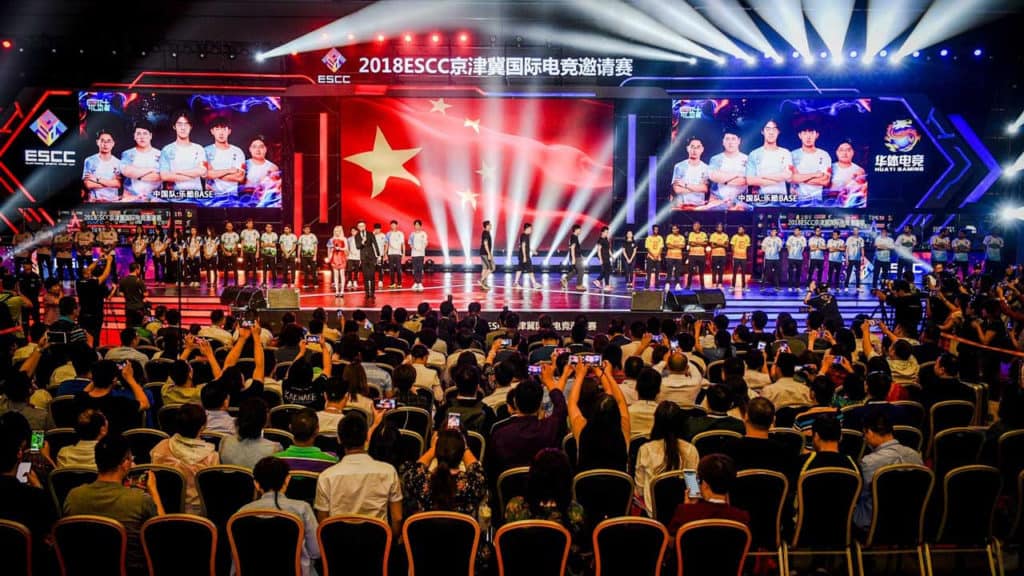 Photo credit: China Cyber Games Summit
Esports is huge in China and shows no sign of slowing down.

According to Statista, China and South Korea are the world’s biggest esports markets9. It was predicted that revenue generated in China’s esports market would exceed 182 billion yuan in 202110, representing an annual growth rate of 23.9%. This growth was accelerated by the Covid-19 pandemic as people spent more time at home. In fact, esports grew by 53.69% during the first half of 202011.

In November 2021, China’s Edward Gaming team won the 2021 League of Legends World Championship12 – an annual international esports tournament organized by Riot Games – and the high-profile victory had over 2.6 billion views on social media site Weibo. The South China Post reported that this big esports win would give the country’s struggling gaming industry a much-needed boost13 after recent government crackdowns.

As a result of mobile gaming dominating the Chinese market, there has been a rapid growth of mini games played inside mobile apps14 such as WeChat. These mini games are easy to access because users do not have to install another application, simple to play and often have a social element which keeps players coming back for more.

Modernization of cable networks and development of cloud infrastructure

The modernization of cable networks15 is fueling the growth of China’s gaming market. With the adoption of DOCSIS 3 – which provides download speeds of up to as 100 Mbps – cable operators can now offer high-performance cloud gaming services in China. Plus, the development of cloud infrastructure means that computing, storage and communication are reliable and cost-effective. Gaming applications will embrace these cloud computing resources, to make gaming one of the fastest-growing sectors for cloud computing in China.

As the number of people playing video games and esports in China continues to rise, so does the prevalence of problematic gaming. It is estimated that 3% of the world’s three billion gamers suffer from gaming disorder. To treat the growing number of people seeking support, clinicians need access to specialist training and resources.

INTENTA equips mental health professionals with internationally-accredited training and tools to help vulnerable players and their families find a healthier relationship with gaming. Discover evidence-based strategies to break down barriers and help your clients regain control of their gaming habits.

Find out more about our Gaming Disorder Clinical Training today.